Next Gen Foods announces today that TiNDLE – its popular, plant-based chicken made from simple ingredients – is now exclusively available in six of Amsterdam’s top restaurants.

Made with only nine ingredients, TiNDLE is the first product from Next Gen Foods, a year old food technology startup helping to make the global food system sustainable with delicious food. TiNDLE is a versatile, easy-to-work-with, plant-based chicken that can take center stage in any dish, from satay to schnitzel, as well as favorites like fried chicken or chicken cordon bleu. 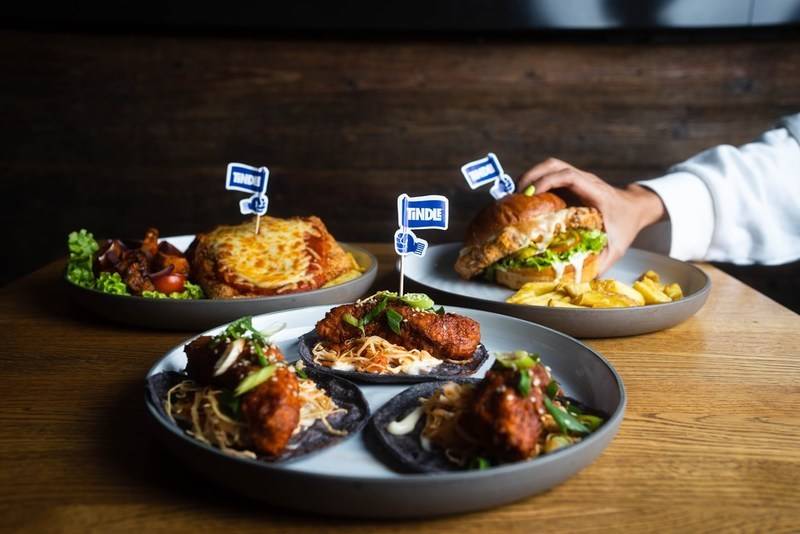 With no compromise to taste, texture or versatility, TiNDLE also contains no antibiotics, hormones, cholesterol, or genetically modified ingredients – and is high in protein and fiber.

TiNDLE has already become a favorite among discerning food connoisseurs in culinary destinations such as Singapore, Hong Kong and the UAE, where it debuted earlier this year to rave reviews. Starting today, diners across Amsterdam can now taste TiNDLE in a range of delicious preparations at six eateries, including:

“The amazing thing about TiNDLE is the texture – it has fibres! The product is incredibly versatile in the kitchen, and I’ve been blown away by the experience each time I’ve cooked with it,” shares Chef Kimberly Stubing of Coffee and Coconuts. “At the restaurant, we decided to go with a fried TiNDLE bao that is fully plant-based, but you wouldn’t even be able to tell the difference.”

Chef Rudolf Brand of CIRCL adds, “It’s always hard to find protein-rich ingredients in a plant-based diet. Now, I can combine the best of both worlds with the protein-heavy TiNDLE alongside vegetables.”

To celebrate TiNDLE’s first weekend in Amsterdam, Next Gen Foods will partner with Box Sociaal to offer complimentary slider-sized samples of their signature burger, the Social Standaard Buttermilk TiNDLE Burger, at IJ-Hallen – the largest flea market in Europe. Visitors can find the TiNDLE x Box Sociaal Foodtruck at the flea market entrance, where they will hand out samples of their brand-new TiNDLE dish to the first 300 consumers – taking place throughout the weekend of 13-14 November, starting at 11:00 each day.

Next stop on the TiNDLE train: Europe

Considered to be one of the world’s leading centers of food innovation and technology, Amsterdam is the first city on the European map for Next Gen Foods.

“Amsterdam is a trailblazing city when it comes to food innovation and sustainability on the plate,” says Andre Menezes, CEO and Co-Founder of Next Gen Foods. “We are thrilled to announce that TiNDLE is now available in restaurants in Amsterdam – offered at some of the city’s top and most innovative culinary destinations. We feel confident that TiNDLE, which was developed by our Dutch Chief Technology Officer and is currently produced in the Netherlands, will be loved by consumers here as well.”

The company has early roots in Europe, where Chairman and Co-Founder Timo Recker was the founder and CEO of the German plant-based meat company, LikeMeat, before relocating to Singapore to start Next Gen Foods. Next Gen Foods’ Chief Technology Officer, John Seegers, is a native of the Netherlands and boasts more than two decades of experience in food innovation within the plant-based food industry – previously working as General Manager of LikeMeat alongside Recker and as the Head of R&D for Meatfree.

In addition, Next Gen Foods manufactures TiNDLE in a state-of-the-art food production facility in the Netherlands – supplying to over 150 restaurants carrying the product globally.

Next Gen Foods was founded in 2020 by Brazilian-born poultry exporter and food industry veteran Andre Menezes, and German native Timo Recker, whose family business made schnitzel and other meat products for three generations.

After a chance meeting at a business incubator, they decided to work on products that reduce humanity’s reliance on animal agriculture. They named their first product TiNDLE as a modern reference to 19th-century Irish physicist John Tyndall, who proved the connection between atmospheric CO2 and the greenhouse effect.

Next Gen Foods is funded by a $30 million investment from Asian and American venture capitalists, the largest initial round ever for a plant-based food startup. Investors include Temasek, K3 Ventures, NX-FOOD and Global Fund GGV Capital – as well as prominent personalities such as business guru Chris Yeh. In addition, support for TiNDLE is growing in Europe, with famed English footballer Dele Alli recently joining as an independent investor to Next Gen Foods.

TiNDLE is now served in over 150 restaurants across Amsterdam, Singapore, Hong Kong, Macau, Kuala Lumpur and the UAE. The company also plans to bring TiNDLE to the United Kingdom, Germany and the United States in 2022.

To learn where to currently find TiNDLE in Amsterdam, visit www.tindle.com.

About TiNDLE
TiNDLE is a juicy, plant-based chicken that offers mouthwatering taste, texture, and versatility. TiNDLE is made without animals and with a fraction of the land, water, and energy used to produce meat from birds. TiNDLE brings people together for a mind-blowing taste experience that also benefits the planet. TiNDLE is the first brand created by Next Gen Foods, a Singapore-headquartered food tech company developing and commercializing innovative, sustainable foods. For more information, visit www.tindle.com or follow @tindlefoods on Instagram.