TiNDLE launched in the United Kingdom

In case you missed it, TiNDLE launched in the United Kingdom earlier this Spring, debuting its ‘ridiculously good’ plant-based chicken in over 50 restaurant locations across the country. This marked a huge moment for the company, not least because it was our second European country but also, the largest TiNDLE team gathering to date.

Since our global debut in March 2021, the team has grown to a staggering 70 TiNDLERs of 10 different nationalities based in 9 different countries. Our UK launch saw 33 TiNDLERS from 6 different countries come together, including Singapore, Germany, Australia and the United States to celebrate over the Clucky This Time and Carolina Chicken Burger at BrewDog. 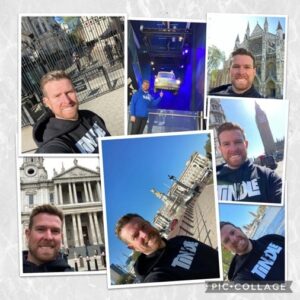 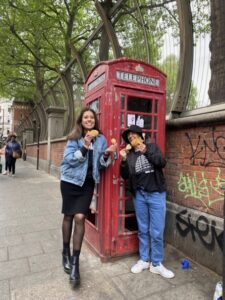 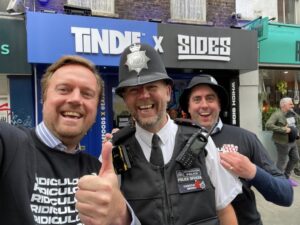 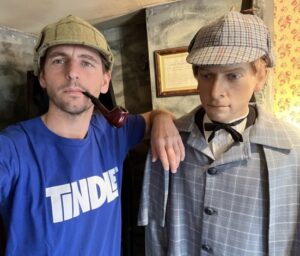 In addition to launching nation-wide at BrewDog, TiNDLE also debuted in the UK at popular restaurants including the iconic gastro-brasserie, sketch London, as part of their Spring Vegan Afternoon Tea. TiNDLE can also be found at Paternoster Chophouse, a British restaurant in the heart of the city, as a TiNDLE Wellington and Crispy TiNDLE Burger. A reflection of its culinary versatility, Let’s Do Maki, serves TiNDLE in a Japanese style, as both a TiNDLE Katsu and Sushi Bowl; and at award-winning Indian curry house, City Spice, in their Delhi Railway Chicken and Homestyle Chicken Bhuna. TiNDLE can also be found in unique, creative dishes at London and Marlborough Get Plucked locations, New Street Grill Restaurant, Old Bengal Bar, Other Side Fried, Refuel Your Soul and Unity Diner. 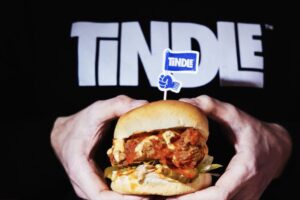 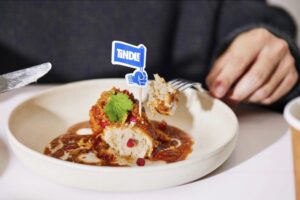 The launch kicked-off with investor and famed footballer, Dele Alli, being the first person in the UK to taste TiNDLE and ended with a three-day pop-up in collaboration with Sides, by The Sidemen in the heart of Soho. This saw 6,000 TiNDLE burgers, served alongside three of their most popular sauces – the Chipotle, BBQ and Louisiana, run out several hours ahead of schedule. The pop-up garnered huge attention from passers-by and even received surprise visits from the iconic British Police Force and London Fire Brigade who dropped by on their lunch break to sample the TiNDLE Burger for themselves.

When asked about their personal highlights of the UK launch, Anne-Chantal Leon, UK Brand Manager, remarked she most enjoyed the creation of the Official TiNDLE taxi. The team TiNDLE-fied the iconic London Black Cab, decking it out with neon blue flashing lights, a sound system and TiNDLE slogans. The TiNDLE cab was used to deliver the complete TiNDLE experience to guests by driving up to their doorstep and welcoming guests inside to enjoy their first bite of the Get Plucked TiNDLE Burger. 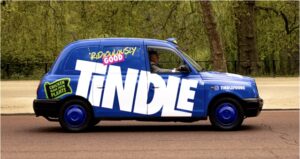 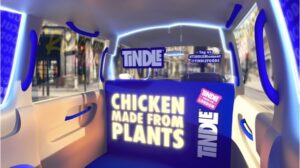 Lester Hung, Marketing Associate, revealed his UK launch highlight to be the TiNDLE Food Challenge. This saw the TiNDLE team up with Plant-Based News to curate three different TiNDLE food challenges with six food-loving, non-vegan influencers. Contestants were, in their words, “TiNDLE Swindled” as they not only mistook the taste of TiNDLE for chicken made from birds but also visually identified TiNDLE as bird chicken.